Action Mechanism of Stabilization of Acidified Milk Drinks by CMC

Action Mechanism of Stabilization of Acidified Milk Drinks by CMC

Figure 3 shows the changes in the particle size of casein micelle and zeta potential with the pH value. When the pH value of the system without the addition of CMC is reduced to 4.7, close to the isoelectric point of casein, there will be a sudden increase in the particle size of casein micelle and apparent precipitation and aggregation phenomena can be visually observed. At this time the system is unstable. The following changes of casein micelle have taken place in the acid adjustment process. At the pH value of 5.8-5, part of α-casein and β-casein will be dissolved out. At the pH value less than 5, the colloidal calcium phosphate will get dissolved; the micelle will disintegrate; and subsidence will occur in the outermost casein, resulting in aggregation of casein. Meanwhile, the zeta potential will be decreasing with the decrease in the pH value and the charges of colloidal particles will be reduced, thereby resulting in the weakening of electrostatic repulsion between the casein colloidal particles and eventually the instability of system. 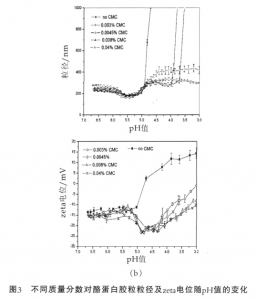 The pH value of acidified milk drink is generally 3.8-4.2, and after adding CMC the system can be stabilized. Compared with the particle size of casein micelle and the zeta potential in the system without adding CMC, in the pH range of 5.8-5.2, the particle size and zeta potential are in the same trend, which indicates the presence of CMC does not affect the dissolution of α-casein and β-casein. When the pH value is dropped to about 5.2, the particle size of casein begins to increase, and the zeta potential also begins to decrease, indicating that the negatively charged CMC begins to be adsorbed on the the surface of casein via electrostatic interaction, and plays the role of electrostatic repulsion. Furthermore, since CMC is a linear polyanionic polysaccharide and easy to form a loop-shaped adsorption layer, like the k-casein effect on the surface of casein under neutral conditions, it has provided the steric hinderance effect and maintained the stability of casein under acidic conditions.

When the pH value is reduced to 4.5, the particle size of casein increases slowly and the zeta potential begins to increase. This is because the positive charge on the surface of casein increases gradually, while the number of effective charges on the molecular chain of CMC at low pH decreases gradually; the intermolecular repulsive force gets weakened; and the molecular chain tends to curl, so that subsidence occurs in the adsorption layer and at this time the system is in the balance of adsorption and subsidence. When the pH value continues to decrease, the particle size of casein micelle in the milk system containing a low concentration of CMC will increase suddenly, and the system will aggregate. This is because the concentration of the added CMC is not enough to make casein produce saturated adsorption, while the milk system containing a high concentration of CMC remains stable at the pH of 3, and the thickness of adsorption layer increases with the increase of mass fraction. Laurent et al have found through dynamic rheological studies that there exists a weak network structure in the pectin-containing acidified milk system. Tromp et al have studied the mechanism of stabilization of acidified milk by pectin and pointed out that in the system only less than 20% of the addition amount of pectin interacts with casein to form pectin/casein compound micelles, and the remaining unadsorbed pectin will form a weak network structure with pectin/casein compound micelles.

Some literatures have determined the adsorption amount of CMC that interacts with casein micelles in the acidified milk system with CMC as the stabilizer. The results show that when the concentration of CMC is less than 0.2%, the added CMC can be completely adsorbed with casein; the high speed centrifugation supernatant does not contain CMC; and the acidified milk system is in an unstable state. With the increase in the concentration of CMC, unadsorbed CMC can be detected in the supernatant, and at this time CMC can produce the saturation adsorption on the surface of casein. But at this time, there does not exist a weak gel network structure in the system, and the unadsorbed CMC only plays a role in increasing the stiffness of system. The increase of stiffness can slow down the sedimentation rate of casein particles, and can promote to improve the stability of acidified milk system. In addition, studies have found although the adsorbed CMC won’t produce desorption with time, degradation may occur under acidic conditions just like the unadsorbed CMC, which is also one of the main reasons leading to the precipitation and instability of acidified milk drinks during storage over time and leading to shortening of shelf time.