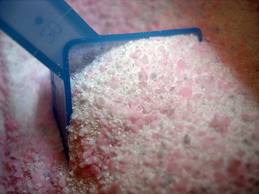 For one thing, it can prevent the deposition of organic salts of heavy metals. For another thing, the dirt suspension which has entered into the aqueous solution because of washing will disperse in the aqueous solution, so it can effectively prevent dirt from depositing on the fabrics.

Consequently, if washing powder and soap with Sodium carboxymethylcellulose are used to do some washing, the cleansing power can be enhanced; washing time can be shortened; white fabrics can keep the whiteness and cleanliness while colored fabrics can maintain the original color brightness. It works best especially washing cotton fabric in hard water because the fabric after washing has a soft feeling and is more comfortable to wear.

In making soap, the function of adding Sodium carboxymethylcellulose is the same as that in washing powder. Moreover, it enables the pressed soap pliable and flexible, more smooth, beautiful and durable.