The significant change that has taken place in cooling and storage processes of bread is “aging”, also called “maturing”. After aging, the bread flavor gets deteriorated; the aroma disappears; the hardness and brittleness of bread core increases; the transparency decreases; the soluble starch in bread decreases; the crystallinity of starch increases butα-degree declines; and the sensitivity to amylase decline. The aging of bread is caused by such factors as water, starch and gluten protein, but most researchers believe that starch is the main factor.

During the baking process of bread, as the temperature rises, the starch in the bread paste will continuously absorb water and swell until gelatinization, so that starch will change from the ordered crystalline structure to the disordered amorphous structure and thus the bread tissue is soft and elastic. In the cooling and storing process, due to the instability of the amorphous phase starch, with the extension of storage time, it will change into the starch of an ordered crystalline structure (ie β-starch) and lose moisture so that the aging phenomenon will occur in bread. In the early stage of bread, the aging of bread is mainly caused by amylose, while in the later stage is mainly dominated by amylopectin. Therefore, it is particularly necessary to add the appropriate modifier to improve the bread quality, delay the aging of bread and keep the moisture of bread moderate.

Currently the main methods used in bread production are as follows: ①The bread is quick-frozen to the condition of below -18 ℃ and stored; ②The moisture of bread is controlled more than 16%; ③Quality flour containing high gluten is used for making bread; ④The emulsifiers are used to slow down the aging of bread. For example, Guangzhou has introduced BF-10 type new emulsifier, stearoyl-2 – lactylate, and stearoyl-2 – calcium lactate, etc. ⑤Increase the viscosity of dough. For this, we have studied the role of carboxymethyl cellulose commonly used as a thickener in bread baking. 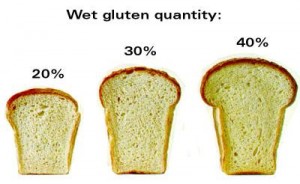 2.1 Impact of CMC on Bread Quality

Experimental results show that if CMC is added into the ingredients, ①the bread volume growth rate can be up to 21.4%; ②the flavor quality and texture structure of bread (including texture degree, central structure, taste, etc.) have also been improved to some extent; ③When the addition of CMC is within the range of 0.10%～0.15%, the quality assessment score of bread baking is the highest. But when the addition amount of CMC is increased to 0.2%, the composite score of bread begins to decline. The possible reason for this phenomenon is : the hydrophilic groups of CMC combine with water in the process of dough making to form the hydrophilic colloid, then absorb water and swell. The swollen CMC molecules together with the gelatinized starch are filled in the gluten network formed by the gluten protein so that the gas-holding capacity can be increased, conducive to maintain CO2 in the bread proofing and baking process, thereby making the bread volume increased and the texture structure improved. However, with an excessive amount of CMC, since its affinity for water is greater than for gluten protein, if not increasing the water consumption in the formulation, it will cause the decline in the water absorption of gluten protein and the decrease in the generation amount of gluten, so that the elasticity of gluten and the gas-holding capacity of dough gets decreased, and the volume of bread gets reduced.

2.2 Effects of CMC on Storage Period of Bread

For bread added with different concentrations of CMC, the changes in the degree of hardening with time can be seen from the hardening curve of bread storage period. After adding CMC, the aging rate of bread slows down and the storability gets improved. When the ordinary bread is placed for 4d, the die-cutting feel will be completely hardened, while after adding MC, bread can extend up to 6-7d. The possible reason is: there are a lot of hydrophilic groups on the molecular chain of CMC, with good hydrophilicity, water holding capacity and emulsifying properties. It can be combined with the starch in dough to form relatively stable compounds, delaying the process of starch from the disordered state to the ordered state (i.e β-based), and thereby making the shelf life of bread extended.

By experiments on the impact of CMC on the bread baking quality, as well as comprehensive consideration of texture structure, flavor and anti-aging degree of bread, it can be determined that the optimum addition range of CMC in the bread making process is 0.10%-0.15%. When CMC s within this range, the baking quality of bread can be improved to the maximum degree.