Conventional Physical and Chemical Properties and Uses of Cellulose Ethers

Conventional Physical and Chemical Properties and Uses of Cellulose Ethers

Properties and Uses of Cellulose Ethers

The appearance is white or off-white and their handicrafts are odorless and tasteless fibrous, granular or powder forms. All the cellulose ethers can be made into granules and powders except low-substituted hydroxypropyl cellulose.

Celluloses have general thermal decomposition properties, that is, above 200℃, the decomposition rate will accelerate with increasing temperature. In air they can be completely decomposed up to 520℃ while in nitrogen they can reach equilibrium decomposition at the temperature of 500℃.

Cellulose ethers are sensitive to microorganisms that produce cellulases. Enzymes first attack unsubstituted anhydroglucose units, resulting in hydrolyzable strand break and then the decrease of viscosity, the substitution of celluloses will protect the skeleton of celluloses. Consequently, cellulose ethers will become stable due to the increase of DS (degree of substitution) and the improvement of substitution uniformity. Due to the increase of DS and substitution uniformity, almost no unsubstituted anhydroglucose units are exposed and get hydrolysis of enzymes.

Cellulose ethers are very stable, protected from air, resistant to moisture, sunlight, moderate temperature, usual pollutants. The solid cellulose ethers remain stable at the temperature of 80～100℃, and at higher temperatures and heated for long term they will lead to cross-linking and then form insoluble network structure. Within the temperature range of 130～150℃, the solid products will slightly get degraded. When the temperature exceeds 160 ℃ to 200 ℃, strong degradation will occur and the color will get dark according to the type and heating conditions of ethers. For example, when neutral aqueous solution is heated for a period of time and then cooled to room temperature, its viscosity will remain unchanged, that is, the gel or cohesion occurring in the middle of heating process won’t affect the viscosity.

Cellulose ethers are generally non-toxic. The varieties that may cause inflammation are laboratory products, and industrial products won’t cause inflammation. Most of high purity industrial products has been approved as food additives and can be used as cosmetic ingredients, but toxic impurities or additives, such as mercury-containing pesticides, are not allowed for the above purposes.Cellulose Gum

Properties and Uses of Cellulose Ethers 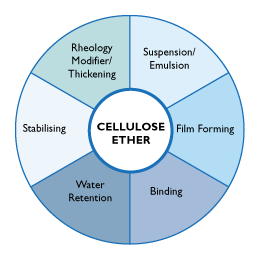