Brookfield LVTD is the unified viscometer in product tests and in line with international test standards. In case we cannot unify test standards with the client, we hope the client can offer samples for testing so that it helps to better unify the standards. 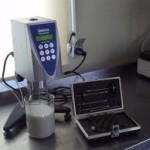 Brookfield viscometer is the most classic and commonly used standard viscometer in the world. It is equipped with a variety of rotor speeds to measure the liquid viscosity within different measuring ranges. Different sizes of rotor can lead to difference of contact area with liquids, and different rotation speeds can also result in the difference of shear rate for fluids.