You are here: Home | News | Cellulose Ethers | What is the mechanism of action of redispersible polymer powder?

What is the mechanism of action of redispersible polymer powder?

In Stage One, after mortar is stirred with water, polymer powder will be redispersed uniformly into the fresh cement mortar and emulsified again. During the stirring process, powder particles themselves will then be dispersed throughout the fresh mortar, but will not be agglomerated with cement particles. The “lubricating effect” of redispersible polymer powder particle enables the mortar mixture to have good construction performance; its air-entraining effect makes mortar compressible and thus easier for construction work. Protective colloids play an important role during the process in which polymer powder is dispersed into fresh cement mortar. The strong hydrophilicity of protective colloid itself gets the redispersible polymer powder to be completely dissolved at low shear forces, thus releasing the initial dispersed particles without changes in nature, and thereby polymer powder can be redispersed. Rapid redispersion in water is a key performance that maximizes the effect of polymer. 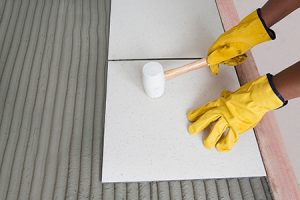 In Stage Two, cement hydration, surface evaporation and base absorption will result in constant consumption of free water in the mortar internal pores. The movement of polymer particles will naturally get increasingly restricted. The interfacial tension between water and air makes them gradually arranged in the capillary pores of cement mortar or in the mortar-base interface region. With the mutual contact of polymer powders, the network-like moisture between particles will evaporate by the capillary. The resulting high capillary tension will be applied to the surface of polymer particles, causing deformation of polymer sphere and making them fused together. At this time, the polymer film is roughly formed.

In Stage Three, through the diffusion of polymer molecules, polymer powders form a water-insoluble continuous film in the mortar, thereby improving the bonding with interface and the modification on mortar itself.