You are here: Home | News | Dry-Mixed Mortar | Why are special masonry mortar and plastering mortar used for aerated concrete block?

Why are special masonry mortar and plastering mortar used for aerated concrete block?

When the traditional laying method is used in construction, sintered solid clay bricks need to be thoroughly watered the day before laying bricks to make it absorb enough water, and then mortar is used for laying and plastering. At this time, the water on the surface of bricks has been saturated and no moisture can be absorbed from mortar any more, thus ensuring the adequate hydration of cement in the mortar, normal development of strength and strong bonding between mortar and bricks. But in terms of aerated concrete, since it is slower in the speed of water absorption and less in the amount of water absorption, the method of watering in advance does not apply to aerated concrete. When traditional mortar is used for the laying of aerated concrete, the moisture in the mortar will get absorbed slowly by aerated concrete, resulting in the inadequate hydration of cement, abnormal development of strength, low bond strength and compressive strength of mortar, as well as poor bonding between mortar and concrete blocks. Thus it will affect the quality of masonry, and the plastering layer is prone to cracking, hollowing or even falling off.

With an analysis of the reasons, it is found that the traditional red bricks are sintered, and that the internal pores and capillary pores are continuously open. While for aerated concrete, air bubbles are formed by aeration of aluminum powder, hindering the development of capillary pores in the pore wall. Due to the closed and porous characteristics of aerated concrete, its surface absorbs water quickly, but it is difficult to absorb water into the inside. During watering, water is easy to enter 3-5mm in depth beneath the surface, but then is very difficult to enter further after that, producing the so-called “inadequate watering” phenomenon.

Thus it can be seen that traditional mortar is prone to hollowing and cracking of plastering layer due to poor water retention. In addition, the compressive strength of ordinary mortar is high, while that of aerated concrete is low, so both properties do not match. Therefore, traditional mortar is not suitable for laying and plastering of aerated concrete blocks. Premixed mortar of good water retention and excellent performance must be developed and used.

The special masonry mortar and plastering mortar used for aerated concrete blocks should first be good in water retention, which thus can prevent the moisture in the mortar from being absorbed by the blocks, not only ensuring the necessary construction operations but also facilitating the development of mortar strength. Second, it should have high viscosity, making the mortar and blocks well bonded as a whole in order to ensure the quality of masonry. 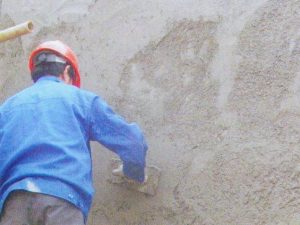